Trump shrank the monument by 1 million acres to allow drilling and mining. Can a lawsuit stop him? 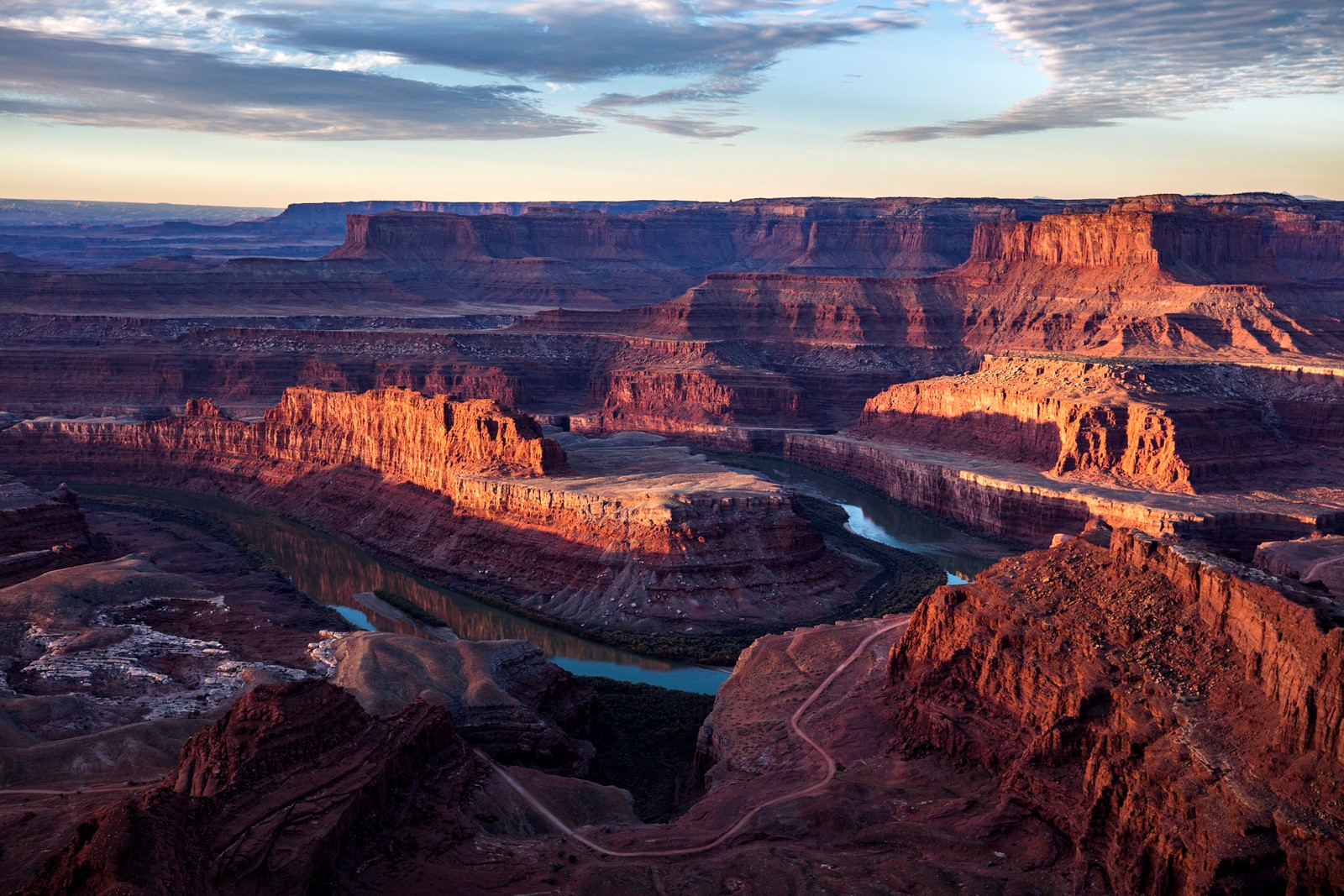 PROTECTION for Bears Ears National Monument, seen here from a lookout in Moab, Utah, is the heart of a lawsuit filed by tribes and environmentalists. (Jim Lo Scalzo European Press Agency)\

BLUFF, Utah — If you ask Louis Williams where he’s from, he invokes tradition and talks about four clans, Navajo on his mother’s side and Sioux on his father’s.

At 40, he’s the father of two young sons and works as a rafting guide on the San Juan River inside what, until recently, was Bears Ears National Monument — 1.35-million acres of exquisite red rock canyons set aside as a monument by President Obama in Proclamation 9558 just before he left office, only to be stripped of protection by the Trump administration in the largest single rollback of public land protection in American history. Trump carved out new boundaries, shrinking protected lands by 1 million acres, primarily to promote energy development.

Williams has the easy swagger of a former athlete, a basketball star in high school and an intramural jock in college. These days, with his Steelers cap cocked to the side, he maneuvers the oars of his 9-foot inflatable boat with the panache of a hip-hop coxswain ruling a river regatta, albeit one with Class II rapids and 900-foot canyon walls. He will guide us down the San Juan, at the base of Cedar Mesa, and perhaps into Hózhó, a sacred state of living in harmony with beauty, the Navajo way.

“Listen to the river,” Williams says, “it changes ideas and perceptions.”

Along the way, ancient petroglyphs inscribed on the canyon walls convey a profound message about tribal survival and history. Even the astoundingly star-filled night skies are code for why this terrain deserves to be set aside. The president’s Interior secretary, Ryan Zinke, overseeing the review of Obama’s monument map, “never even got his shoes dirty with Cedar Mesa sediment,” Williams points out. If he had, the implication goes, the original boundaries would still stand.

I wanted to see this part of Bears Ears for myself, before it is opened for uranium and oil and gas development. The day before we put in at Sand Island with our camping gear, food supplies and groover, I stood on a precipice overlooking the Valley of the Gods on the Moki Dugway, a series of steep sublime switchbacks that climb 1,200 feet to the top of the mesa. But turn a few degrees and there’s the town of Blanding, and what looks like a nearby shimmering mirage. It’s no mirage. It’s radioactive waste pools at the only uranium processing mill in the United States.

After Trump’s order, can we protect this land for future generations?

That question lies at the heart of a lawsuit pending before U.S. District Judge Tanya S. Chutkan in Washington. A coalition of tribes and environmental groups sued Trump in December after he announced his decision to dismantle Bears Ears by chopping it into two smaller “units.” The president’s new monument boundaries purposefully pave the way for uranium mining and oil and gas drilling leases, according to documents uncovered through a series of Freedom of Information Act requests, despite denials to the contrary by Trump and his cronies.

The president acted unlawfully and exceeded his authority, the plaintiffs claim, violating the separation of powers in the Constitution and the Antiquities Act of 1906, which authorizes presidents to designate monuments and was originally written to prevent the looting of Indian artifacts. Only Congress, not a president, has the power to revoke or modify national monuments, they claim. If the courts ultimately rule that presidents can shrink already designated monuments, none of them — from Muir Woods to the Statue of Liberty — is safe.

Chutkan must first decide whether to allow the case to be transferred to federal court in Utah, as Trump’s Justice Department lawyers have requested, or to keep it in the District of Columbia, as the Indian tribes prefer. They believe the fate of America’s public lands are a national concern, not one state’s.

“Everyone’s confused,” Williams told me, as he steered our boat toward the confluence of Butler Wash and the San Juan, near another petroglyph panel, this one featuring a floating flute player, like a Chagall fiddler. Navajo, Hopi, Zuni and two Ute tribes negotiated and advocated for nearly a decade to get monument status for Bears Ears. “We’re like, dang — what’s going to happen now? Politics is disgusting.”

No kidding. I had traveled here, in part, to unplug and escape the outrages recorded by daily news. But there is no escaping the barbarism of our government. We navigate it, even within these canyon walls. Some of the worst abuses in our history echo here.

In 1864, the U.S. Army burned Navajo hogans and orchards, marching 9,000 people — including women and children — at gunpoint 350 miles from Arizona to Ft. Sumner in New Mexico. Hundreds died of hunger and abuse along the way. A few escaped this “Long Walk” by hiding in the Bears Ears Buttes, another reason the Navajo view the area as a spiritual refuge.

Bears Ears, Williams says, is “part of our healing. We’re trying to restore what’s been lost.”

Part of what’s been lost, of course, is respect for the rule of law. When the Department of the Interior invited public comment about shrinking Bears Ears, more than 2 million people weighed in, mostly to oppose the idea. Nevertheless, legislation to codify Trump’s recision has been introduced in Congress by Republicans from Utah. Democrats, including three representatives from California, proffered their own legislation to return Bears Ears to its original monument status. The fight is not going away anytime soon.

Ultimately, the courts will decide whether the president abused his power. As both sides await the judge’s decision about where the case will be heard, she should take into account the letter 71 environmental and land-use law professors sent to Zinke early on in the review process. They make plain that only Congress, not the president, has the authority to diminish or abolish a national monument, under the 1976 Federal Land Policy and Management Act.

It’s impossible not to be humbled by the staggering beauty of Bears Ears, not to come away with a deeper understanding of the shape of time — how the past, present and future can be captured in a contested landscape.

Louis Williams sees the challenge in stark terms: “The people against us are still in their own little greed world. Protection means protection.”